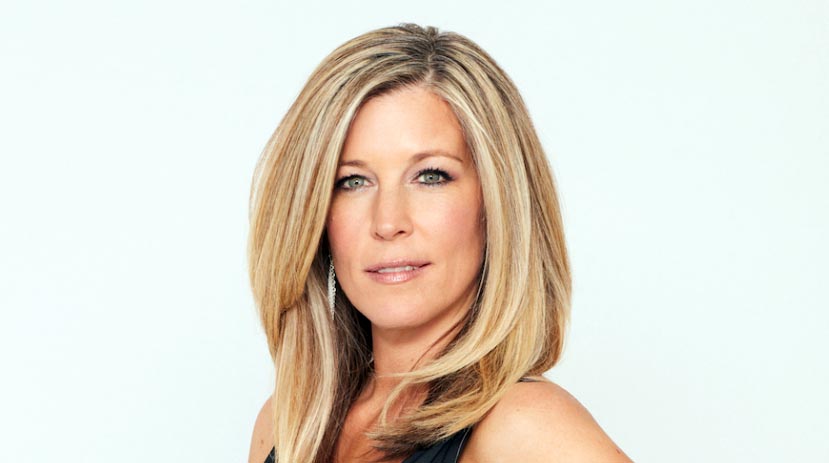 Laura Wright plays the critical role of Carly Corinthos on General Hospital. Critics and fans agree that Wright brings an equal amount of flair, grace, and ferocity to the character.

So, please get to know her entire career on General Hospital and how much money she has made with the series. Also, check out Laura’s married life, wife, and kids in her bio.

Laura Wright plays the role of Sonny Corinthos’s (Maurice Benard) wife, Carly Corinthos. Since her character is the wife of the soap opera’s protagonist, it will be only right to consider her as the show’s female protagonist. It also explains why she has featured on more than 2000 episodes across the show’s impressive run.

Laura took on the role of Carly in 2005, and 16 years on, she is still going strong. Initially, she was an aggressive and short-tempered woman who often got into catfights with other female characters and the Quartermaine family.

Over the years, she grew to be more calm and level-headed. Steve Burton’s character, Jason Morgan, is her best friend. Furthermore, she is pretty good friends with Olivia Quartermaine (Lisa LoCicero), with whom she co-owns the Metro Court Hotel.

In the real world, people seldom get a fairytale ending when it comes to love and marriage. Wright, however, certainly thought that she was one of the lucky ones.

After all, she enjoyed several years happily married to her former husband, John Wright, an architect. Laura wed her ex-husband on October 7, 1995.

The couple stayed together for 21 years before an announcement in April 2016 shocked the world. They were getting a divorce and calling quits on their marriage.

Laura was frank in her public statement,

“John and I have decided to end our 20-year marriage. We remain committed and dedicated to our two wonderful children and will always be a supportive, loving family of four – we are just doing it differently now!”

Furthermore, Wright admitted that they had been separated for over a year before finally making the announcement public.

However, she was sure to let her fans and followers know that all that time helped settle her emotions. It gave her a positive mindset, reflected in the statement that read;

Laura Wright may no longer be married, but she still shares two children with her former husband. The names of her children are Lauren and Michael. Her daughter, Lauren, is 23 years old, and her son, John Michael, is 21 years old.

She often shares pictures with her kids on social media, showing off the good relationship she enjoys with both of them.

Is Laura Wright pregnant? If she is, then it is certainly news to us. We’re just kidding; of course, she is not pregnant right now.

However, we understand why there is a spike in search relative to Wright’s pregnancy because there is a similar trend about her engagement and marriage. We know exactly who to blame for all this fiasco, which is none other than her new boyfriend.

Yes, many people did not know that Laura Wright was back in the market, let alone a long-term relationship with Wes Ramsey.

He is a fellow actor and a soap opera actor, so their path was bound to cross sooner or later. They met on the set of ‘Guiding Light,’ where Laura was portraying the role of Cassie Layne Winslow.

Is She Dating or Already Engaged?

Ramsey and Laura met up again after he signed on to appear in General Hospital in August 2017. He fell in love with Laura gradually, and they’d start dating after a time.

Since then, the two have been dating and no show no signs of slowing down anytime soon. The two often share pictures out on adventures and vacations. This is where outlets speculate that Laura and her new man are getting serious fast.

However, we can assure you that they are not engaged yet. The relationship hasn’t made it that far just yet. Wright confirms this in a post as she writes, “we are not engaged. Just living in love and super happy.”

Yes I just adore this man …. however we are not engaged. Just living in love and super happy 💕💕💕 #grateful #livininlove

Wright’s breakthrough role came on ‘Loving‘ back in 1991. Her stint on the show came to an end after 14-years, after which she shifted on to a few other spin-offs.

Laura would gain even more notoriety as Cassie Layne Winslow in the soap ‘Guiding Light‘. Other than that, she also has credited roles in several films such as ‘Hit The Floor’ and ‘Joy.’

Putting all of this to mind, Laura Wright’s net worth is around $10 million. It is not surprising, as sources estimate that she makes around $5,000 per episode.

Additionally, Wright has many other successful business endeavors that further boost her bank account.

How old is Laura Wright? Her Age

Reports suggest that she celebrated her 50th birthday with her boyfriend, Wes Ramsey. They were in Venice, California, at the time, as you can tell from the picture she put out on Instagram.